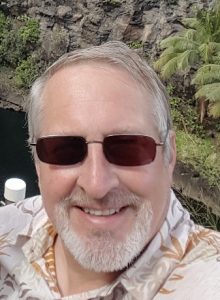 Joe Prin is an Eagle, Idaho resident and has lived in Idaho with his wife Vicki since 1985. Married in 1981, they have 3 children, two dogs, and a bunch of chickens.

Since his first job in Junior High School, Joe has worked in many different occupations and is not afraid of new challenges. He delivered newspapers, spent junior and senior high school behind a grill at Dairy Queen, worked thousands of feet underground for AMAX Mining, and was the campus representative for Anheuser Busch while attending Mesa College in Grand Junction Colorado. He began his professional career in the retail hardware and lumber business with Boise Cascade and BMC West. It was here the roots of The HomeFix Radio show began. Although the radio show has continued uninterrupted since its Idaho start in 1987, Joe also worked as the Marketing Director for Beacon Light Products; a company that invented and manufactured light bulbs with built in computer chips. He was also the owner of PrinPoint Marketing, an advertising design and placement company.

Joe became a Remodeling Contractor in 1994 as a result of the HomeFix Radio Show and closed the business in 2012 when he was offered and accepted the position of Facility Manager for the Cathedral of The Rockies, First United Methodist Church in Boise.

He is also an author (I Want A New House- 2009), a columnist who has written over 600 newspaper and magazine articles (Idaho Statesman, Idaho Press Tribune, The Eagle Independent, Et Cetra), and currently is the Editor for a national hobby magazine for the Brewery Collectables Club of America (www.BCCA.com).

20 plus years ago, Joe and his radio co-host and business partner Stan McKie produced and stared (?) in a low budget television show (“The Home Improvement Show”, and later “HomeFix”) based on their radio personalities and interactions. The show taught viewers about home repair, DIY projects and home maintenance long before cable TV made this popular. Elsewhere on this website, you will find links to some of these shows. The program ended with over 100 half hour episodes all being filmed and edited by Sue Rosebury and Kevin Fritz. These shows were unique for their time and at the end of the run aired on PBS in over 50 markets.